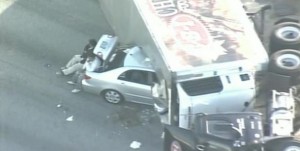 Securing your load is important.

In April 2015 an accident with injuries occurred in Miami-Dade Florida where a tractor-trailer lost control and crossed the median into oncoming traffic. The 18 wheeler was trying to avoid a wheelbarrow that had fallen out of a pickup truck. Six vehicles in addition to the tractor-trailer were involved in the accident. The pickup truck was traveling northbound on the Turnpike with an unsecured load according to a state trooper.

Two people were critically injured in this accident. One woman had to be cut out of her van with the Jaws of Life. Traffic was shut down for four hours to clean up the accident. Highway state trooper stated that an arrest is likely. They will track the pickup truck through traffic cameras and locate the driver.

The consequences of an unsecured load can be devastating. The injuries, vehicle damage, road closures, and a possible arrest could have been avoided if the pickup driver had taken a few minutes to properly secure his load.

This post was originally published on May 8, 2015, and has since been updated.