|  Click to View Your Cart  |  Login/Register
You are here: Home / 2. Cargo Control / How a Progressive Utility Partnered with Bednet® for Environmentally Sound Solutions 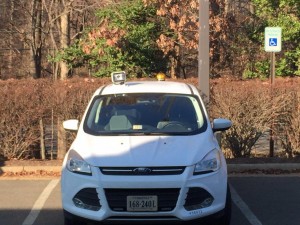 Dale Collins (CAFM*) is a man on a mission. As Fleet Services Supervisor for Fairfax Water (a metro DC utility), Dale has taken a long hard look at his fleet and potential fleet solutions. Bigger, he has found, is not necessarily better. While it is essential that vehicles in the fleet must perform to their given tasks, vehicles that over-perform have higher upfront costs, may require additional maintenance, burn extra fuel and pollute a whole lot more.

The easy choices for new fleet vehicles are the safe choices; the choices that have been made time and time again. But by embracing new technologies and examining the actual needs of each vehicle’s job function, Dale began to right-size the fleet. Super duty pickups became half tons, V8s became V6s, V6’s became in-line 4s. Expensive high maintenance diesel engines became gas engines, some half-ton pickups became mini SUVs. All these changes embraced newer engine technologies while lightening the vehicles considerable. On the job performance hasn’t suffered a bit. But emissions and costs are down considerably.

Initiative of the Year 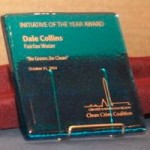 This effort was so successful Dale was awarded the 2014 Initiative of the Year by Greater Washington Regional Clean Cities Coalition (GWRCCC) for his right-sizing efforts and idle reduction training he arranged for the field staff. It is also a good model for other utilities to emulate. 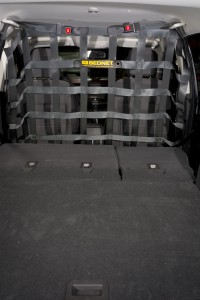 Part of the right sizing to SUV’s and small vans left an issue on the table.  Dale needed effective separation of his people from the cargo they carry in these vehicles. In case of accident, a secondary impact is possible whereby objects from the back seat or cargo area may become ballistic and strike the driver. Although rare, this is a real and dangerous possibility. In late 2014, Dale began discussions with Bednet® about his needs and the issues at hand. He offered to pilot a new solution and to advise on the workability and design of any prototypes. This was just the nudge Bednet® needed to get the designs for the SUV and Van Bulkheads off of the drawing board and into practice.

Very early in 2015; an effective, lightweight and removable solution was officially born. When asked what he thinks about these bulkheads, Dale says “My people love it, and if they love it so do I!” Bednet® owes Dale a debt of gratitude for his help and his advice. For his part, Dale found effective, lightweight and inexpensive fleet solutions to his problem. He identified and overcame a hurdle in the drive to right-size his fleet. We should all thank and congratulate him for the work he has done in greening up his fleet, one truck at a time.

This post was originally published on Dec. 9, 2015, and has since been updated.